The Worst Bond Market Ever

The Worst Bond Market Ever

The first half of the year presented many challenges for the markets: the Russia/Ukraine conflict, inflation climbing to 40-year highs and tightening from the central banks. With those challenges came increased volatility and an aggressive repricing of risk in both the stock and bond markets.

This repricing caused markets across the board to slide during the first six months of the year, with the S&P 500 reaching its lows on June 16th (-23.1%) and the Bloomberg US Aggregate Bond Index bottoming on June 14th (-12.7%).

Despite a bear market rally that saw markets climb through the end of July, we’re still off to the 8th worst start to a year for stocks and by far the worst start ever for the bond market.

So what happened to bond markets? A year ago, inflation was just becoming a buzzword as it climbed from years of sub-3% increases to more than 5%. At the same time the Federal Reserve leaned into the idea that it was only transitory as the economy started fully ramping up from COVID shutdowns and government stimulus. The Fed did not want to immediately address inflation at the fear of derailing the strong employment picture and economic recovery.

The belief that inflation was transitory was reflected through the Fed’s own forecast of the federal funds rate – the rate at which banks lend to each other. In December 2021, the markets widely expected the Fed to target a 1% fed funds rate by the end of 2022, which aligned with the board’s own projection of interest rates.

By March though, inflation had climbed to 8.5% and the Fed had to change its tone. The Federal Reserve is charged with a dual mandate of maintaining price stability and maximum sustainable employment which they manage through monetary policy – the control of the nation’s money supply and interest rates.  With the unemployment rate continuing to decline, the full focus was shifted towards controlling inflation.

At the March meeting, the Federal Reserve raised interest rates by 0.25%, a move that many economists and market participants chided as too little.  At their May meeting they increased rates by 0.50%, followed by an even larger 0.75% increase in June. In six short months, the fed funds rate went from 0% with a 1% year-end target to 1.5% with a year-end target now of 3.5%, all while inflation remained unchecked through June.

With the market adjusting expectations from a 1% target fed funds rate to 3.5% target rate, interest rates and prices needed to reflect the new reality. 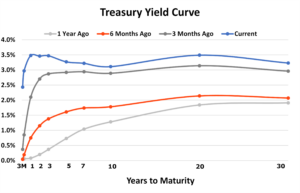 If there is a positive to be found, it’s the effect on the interest and income you earn with many money markets yielding close to 2% and bond funds yielding anywhere from 3% for core funds up to 6% for high yield funds.

Looking forward, the Fed has adjusted their expectations and board members are now projecting that the fed funds rate will rise to about 4% in 2023 before settling back down. Inflation in July cooled slightly as energy prices came down and employment remains strong (although there are sectors righting their ships after years of rapid growth and tight labor markets).

These adjustments should stop the bleeding in bond prices and bring forth increased stability, allowing bonds to generate additional income for your portfolio and provide ballast to your overall portfolio. If you have questions about your personal situation, your Shakespeare advisor would be happy to talk with you.