What is Happening with Inflation?

What is Happening with Inflation? 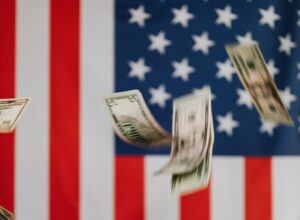 Inflation is everywhere you look: airfares, dining out, groceries (both in the form of price and shrinking packaging), and probably most noticeably at the pump. The most recent inflation number was 8.5% for May, the highest point since December 1981 when inflation was 8.9%. Looking at it by decade, you can see that we have enjoyed over three straight decades of below average inflation so today’s numbers are unsettling. Most of us have never experienced inflation this high or were too young to feel the impact. 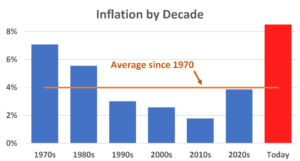 How Inflation is Measured

The Bureau of Labor Statistics (BLS) reports the Consumer Price Index on a monthly basis. It is comprised of eight categories that are each assigned a relative weighting. Within each of the eight categories there are multiple subcategories capturing more specific items like college tuition, gasoline, used cars and trucks and airfare. 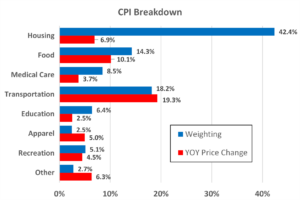 Housing comprises the largest component of the CPI followed by Food and Transportation. These three components add up to 75% of the reported CPI, meaning increases in grocery bills and at the pump – which are more volatile – can have a significant impact on the reported number. A common argument is the Housing component does not fully capture the increases we have seen in housing prices today because the calculation uses an alternative called Owners’ Equivalent Rent (OER) rather than home price appreciation. For example, home prices have increased by more than 21% over the past year while the OER was 4.8% for the same period. This has helped keep the reported inflation in Housing much lower, which isn’t true for someone who is actively looking for a new house.

Inflation is classically defined as too many dollars chasing too few of goods. Loose monetary and fiscal policy over the past few years in response to government mandated shutdowns has increased the supply of dollars in our economy. That paired with a strong economy that has added an average of 545,000 jobs per month over the past year has kept the flow of money and demand for goods high.

The Federal Reserve is mandated to balance unemployment and inflation, and they can do so through various market operations including increasing or decreasing interest rates and manipulating the money supply.

We are starting to see the signs of an economy responding to increasing interest rates and a declining money supply. This shouldn’t come as a surprise though, the Federal Reserve has raised rates three times this year starting with 25 basis points in March, another 50 basis points in May and an unprecedented, but needed, 75 basis points in June. They are currently forecasting an increase to 3% Fed Funds rate by year-end. In addition, the growth in the money supply (M2) as measured by the Fed has slowed to 6.6% which is nearing historical norms. For 2022, the annualized growth has been a more modest 3.1%. It will take time for all the money injected into the economy over 2020 (24.8% growth) and 2021 (12.7% growth) to be fully absorbed, but slower and lower growth in this measure is a welcomed sign.

Interest on your checking account may not be increasing yet, but savings and money market accounts are beginning to yield 1% while 1-year CDs are closer to 2% and short-term Treasuries nearing 3%. These numbers may feel better but they still significantly lag current inflation levels, so much so that we are nearing the largest gap between interest rates and inflation since 1980.

A reason for the slow rise in yields could be market expectations for inflation over the long-term have remained low. The breakeven rate between the 5-yr Treasury and 5-yr TIPS (Treasury Inflation Protected Security) is at 2.7%, meaning markets expect inflation to average 2.7% over the next 5 years. Expectations barely change even when looking out to the 20-year breakeven inflation rate.

Much like stock markets, the direction, magnitude and duration of inflation is impossible to predict. We can feel the impact of inflation and want to adjust accordingly, but the risk is protecting for something that is ultimately out of your control.

I’m reminded of a quote by another advisor, “Anyone can design a financial plan or portfolio that does well if the assumptions are correct. The trick is to design one that works pretty well even if you are completely wrong”.

The Shakespeare team is happy to answer your questions regarding the current market conditions. Our goal, as always, is to provide peace of mind, knowing there is a plan in place to help achieve our client’s personal goals.