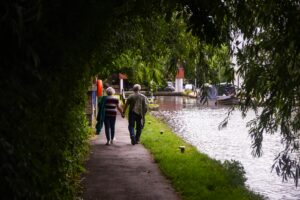 In speaking with a couple who retired a few years ago, they commented they are ‘happily irrelevant’. That interesting comment couldn’t be left unquestioned, so I asked a follow-up question and sat back to learn more.

They explained during their working years they both had leadership positions in their respective jobs, were actively involved on various committees in their church and were the troop leaders and team managers for their children’s extracurricular activities. They were anything but irrelevant; they were leaders in every sense of the word and in every aspect of their life. People looked to them not just for input, but for direction on what should be done and were happy to act on their instructions. These people weren’t just busy, they were wired!

Then the future they had been working towards turned into reality. The kids progressed through college and started lives of their own, their leadership positions at church had run their course and they retired from their long careers. They found themselves suddenly in charge of…NOTHING! The phone that used to ring 16 hours a day had suddenly fallen silent, the email box was empty and their Franklin Day Planner had no remaining tasks.

Like many retirees, they realized they could not sit home and do nothing. They wanted (and needed) to have some structure and goals to their golden years. They laid out five years’ worth of travel plans, with bucket list trips intermingled with smaller getaway trips. They continued to be involved in their church, but now served as volunteers at two events per year rather than sitting on busy committees. Their children blessed them with grandchildren and they became active and involved grandparents, serving as back-up daycare and hosting weekly Sunday dinners that became a wonderful tradition. They also joined a health club to stay fit, signed up for dance lessons and hired a Spanish tutor to help them with their Espanol prior to a month-long getaway to South America.

This couple was anything but irrelevant, and in their mind they were happy not to have the responsibilities that go with a career, having children and being active in your community. They were contributing on their terms and at their pace. They had settled into a gratifying retirement – a retirement made better by years of shouldered responsibility. At a recent dinner party, they were introduced to someone new who asked the typical question of ‘what do you do for a living’. They simply smiled and said they were ‘happily irrelevant’. We could all be so lucky.

Your Shakespeare team is here to listen to your goals, create a strategic plan through the busy times and be your partner for the golden years. We provide support through careful planning to keep the happily irrelevant times long-term and balanced and we will guide your family for generations to come.